Simca (Société Industrielle de Méchanique et de carrosserie automobile) once started as assembly company for Fiat. The Simca 8 Cabriolet is actually a Farina with another front. Battista ' Pinin'Farina, at that time working in the family business ' les Stabilimenti Farina' designed this cabriolet based on the Fiat 1100 S, a car with the same chassis as the Simca 8. The design was used for Cisitalia and the Fiat 1100 Spider. 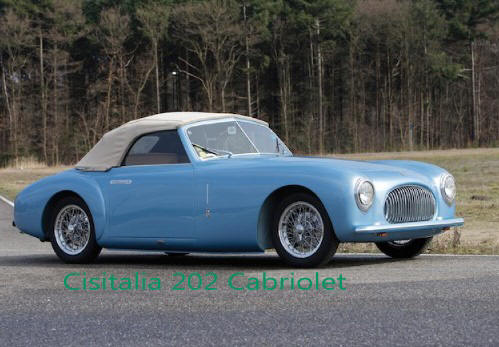 Also the body of the Ferrari 166 Inter Cabriolet was delivered by Stabilimenti Farina. The price of the Simca 8 Sport has not increased that much compared to the Italian brands so far. 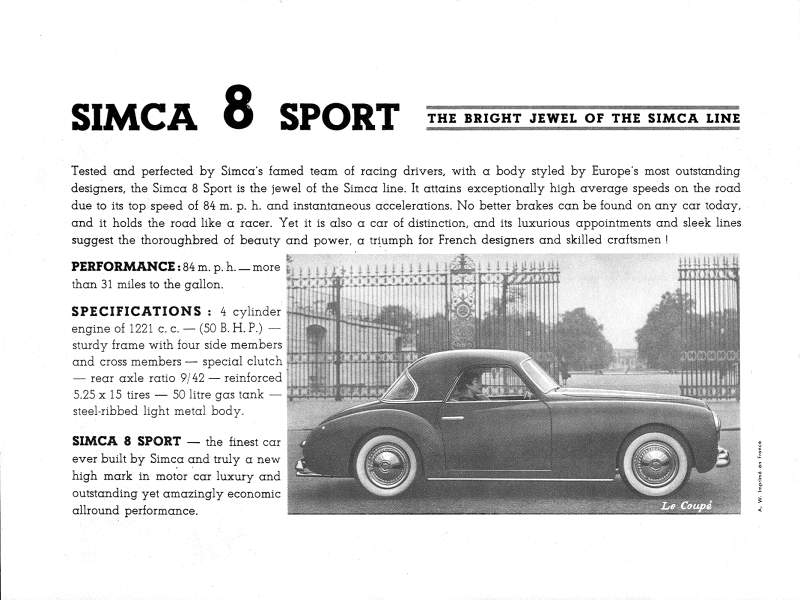 The Coupé was born in 1949 on basis of the cabriolet. Simca put in a campaign to obtain a French subcontractor and find it in the person of Jean Daninos, director of Facel. Farina grants a license to allow the installation of a production line in the plant Facel de Colombes, in the periphery of Paris, from light alloy elements pressed in the factories of Amboise, and the completion (painting and upholstery) is assured by the Dreux works.

In 1950 to 1952 the Simca 8 Sport took part in the Rallye of Monte Carlo with famous formula 1 drivers like Maurice Trintignant and Jean Behra.

The offered Simca 8 Sport with aluminium body (doors, roof, hood and trunk lid of steel) is from October 1951. This means that the car has a modified grille, another dashboard and rear lights. In the 90's the Simca was imported from California as a restoration object by a farmer from Winterswijk. In 1997, the car was bought by Mr H.S. who restored the car. The restoration was finished in November 1998. That same year, the car was shown in the Dutch magazine "Automotive Classic". In March 1999, the car was advertised. In May, the car took part at the Classic AutoRAI at the stand of the Simca Automobile Club Netherlands. In June 1999 the car appeared in the German magazine "Oldtimer Praxis". In this article pictures of the car were shown before the restoration.

In November, the 8 Sport was purchased by a famous Dutch collector of French classics cars. In 2001, the Simca 8 Sport appears in the magazine "Autoweek". It appears that the owner is not entirely satisfied with the restoration. The previous owner has not restored everything with original parts. Therefore the collector decided in October 2002 to exchange his Simca against a fully restored black Simca 8 Sport (earlier this year sold by Kucarfa).

The new owner has already some experience with a full restoration of a 8 Sport. He searched for the missing parts and builds the car all over again. He finds a set of original Hubcaps, of which the right differences of the left. The grill can’t be found anymore and is created by himself. Attention for detail is evident in the homemade wheel wrench for the central nut.

Because the owner is looking for a new project, we can now offer this beautiful Simca Huit Coupe for sale. The car comes with extensive documentation and photos of the restoration.